The Cat Came Back Lyrics

Looking for a funny campfire song for the whole family? Here are The Cat Came Back lyrics.

There are numerous versions of this song. Some have verses that are too bloodthirsty for my taste - especially for a just-before-bedtime singsong! I like the Cat Came Back lyrics used by Bill Slavin in his wonderful illustrated book. 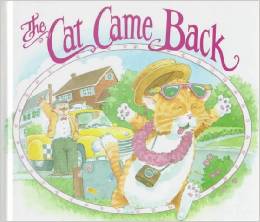 I first learned The Cat Came Back years ago when I was working at a daycare center. The children loved it!

When I had children of my own, I taught them the song. It became a family favorite. It's just the thing to sing around the campfire!

Old Mister Johnson had troubles of his own,
He had a yellow cat that wouldn't leave his home.
He tried and he tried to give that cat away,
He found an ocean liner going far, far away.

Mr. Johnson gave the cat to a man in a balloon,
He said, "Please take this cat and leave it on the moon."
The balloon came down about ninety miles away.
Where the cat is now, well, no one wants to say...

Mr. Johnson gave the cat to a fellow going west,
He said, "This cat's a present for the one you love the best".
First the train hit the track,
then it bounced and hit a rail,
Not a person stayed around to tell the gruesome tale...

The cat was now a father of a family of his own,
They lived with Mr. Johnson till there came a cyclone.
It tore the house apart and tossed the cats around,
The air was filled with kittens,
The cat could not be found...

More About The Cat Came Back Song

Either way, you can enjoy this song!

Now that you know The Cat Came Back lyrics, look here for more songs to sing around the campfire.

Visit The Camping Family home page for help planning your next camping trip.