Here are the lyrics to Taps, so that you can end your campfire with this lovely and haunting song that signals "bedtime" the world over. 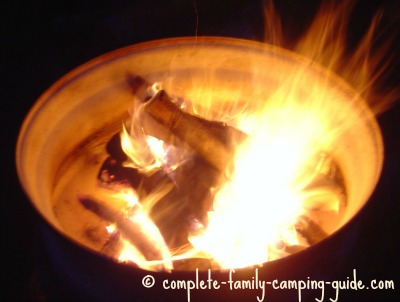 The lyrics to Taps are short and easy - and so is the tune. It uses just four different notes, which makes it easy to play on simple instruments. If your children play the recorder, bring it along!

If you happen to have a bugle on hand (and a bugler!) bring that too!

The song is traditionally played with the notes A, D, F# and A.

Your camping neighbors will be impressed and pleased (I hope!) to hear Taps played as the sun goes down! 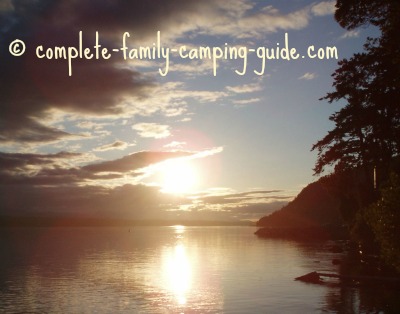 If they're not, you can blame me!

There are several versions of the Taps lyrics, but we sing just this verse:

Day is done
Gone the sun
From the lakes, from the hills, from the sky
All is well
Safely rest
God is nigh.

This interesting and poignant tale circulates regularly on the Internet.

According to the story, the tune was written during the American Civil War.

A Captain in the Union Army discovered a wounded Confederate soldier on the battlefield. When he turned the soldier over, he discovered that the fellow was dead - and, shockingly, that it was his own son, who had been studying music in the South and who had secretly enlisted in the Confederate Army.

When the Captain searched the boy's pockets, he discovered a scrap of paper on which was scrawled some musical notes.

The Captain asked his superiors to give the boy a full military funeral. They refused, but allowed for a simple burial with just one bugler.

Of course, the bugler played the tune that was found in the boy's pockets: "Taps".

Isn't that a touching story? It's not true, though. "Taps" as we know it did originate with the US Army during the Civil War, but that's the only part of the story that is genuine. The truth is much less dramatic.

A general in the Union Army decided that he didn't like the existing boring bugle call that signaled "lights out".

He came up with a new tune and whistled it to his brigade bugler. Together they modified the tune, scribbling the notes on the back of an envelope until they had something that the general liked.

The bugler was ordered to play the tune that night. The song was heard by nearby brigades, who sent their buglers to learn the tune. Before long, this song was the regulation "lights out" signal throughout the Union Army.

Taps is easily recognizable all over the world. It is played by the U.S. Army and by the Boy Scouts and Girl Guides to signal the end of the day. It is also played at all U.S. military funerals.

Why is it called "Taps"?

I wondered that, too, when I started researching the lyrics to Taps.

The word comes from the Dutch phrase "doe den tap toe", used from about the year 1600.

During the Thirty Years' War in Belgium and the Netherlands (1618-1648), drummers were sent into the towns at 9:30 pm every day to signal the innkeepers to stop serving beer so that the soldiers would return to their barracks.

"Doe den tap toe" was shortened to "taptoe" which is the root of the words "tattoo" and "Taps".

There you go: some trivia to share at your next campfire!

Now that you have the lyrics to Taps, you'll be able to start a new family camping tradition.

Once you have learned the lyrics to Taps, choose some more great songs to sing at your next campfire.

Planning a family camping trip? I can help! Visit the Complete Family Camping Guide home page to get started.