Visit the state park at Bannack Montana and experience a real ghost town! 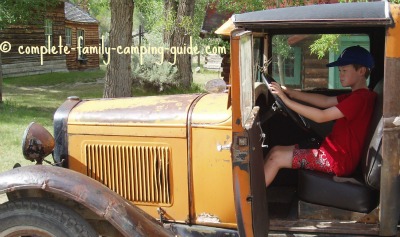 The town of Bannack Montana was founded in 1862 after gold was discovered on nearby Grasshopper Creek. Prospectors and businessman hurried to join the gold rush, and the town boomed.

At its peak, about 3000 people lived in the townsite, with another 2000 in the surrounding area.

The boom didn't last long, though. When gold was discovered in nearby Virginia City in 1863, many of the miners packed up and moved over there.

For the next 70 years, Bannack continued as a quiet mining town.

By the 1930s the town was virtually deserted except for a few hardy families.

The townsite and surrounding area became a state park in 1954.

Today, about 60 of the original buildings remain standing.

Most are in a state of what is politely called "arrested decay". They are kept from falling down, but they have not been renovated or beautified.

This is not the type of heritage town where you see costumed guides, restored buildings and mowed grass.

The stores and houses are exactly as their builders made them - but now they are weathered and old. The paint is faded and the porches sag. 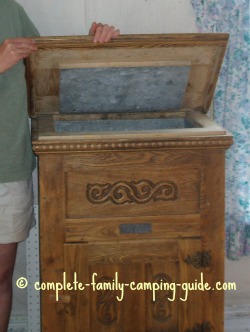 In the summer, you can take a guided tour. You'll go into the buildings and hear stories about the town.

In the off-season, you are welcome to wander the town by yourself. Pick up a brochure at the visitors' center and take a self-guided tour.

We had fun wandering around and imagining what it would have been like to live in Bannack during its heyday.

One house has been partially restored. It is furnished with period appliances and furniture.

Check out this wooden ice box! The hand-operated vacuum cleaner was cool, too. I'm sure it was considered a marvel of modern technology in its day!

We had fun playing the pump organ. 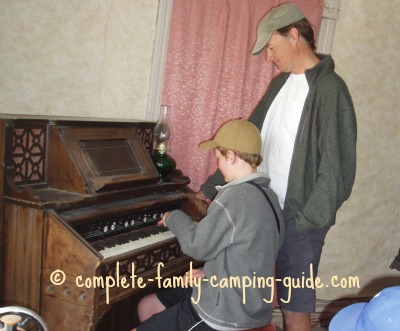 There are two campgrounds in the park. Both are smallish, with limited services. 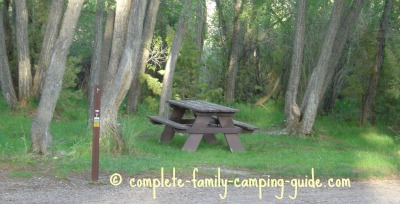 The Road Agent Campground is very shady. It's also a bit damp and boggy. Bring your mosquito protection! You can read about mosquito bite prevention here. 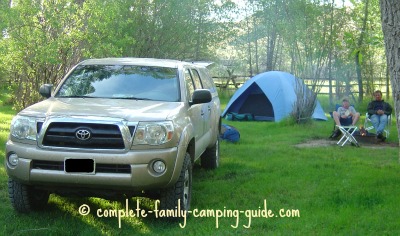 It has small sites, suitable for tents or small campers. There is an accessible toilet.

The Vigilante Campground has more sun. It's larger, and suitable for RVs. There's even a camping tipi!

Each campground has a water tap.

Each site has a fire ring and picnic table.

There are no hookups in either campground.

The park is open year-round. You are welcome to wander around the townsite anytime.

The visitor center is open only in the summer and on fall weekends.

In addition, there are special events throughout the year.

There is lots to do in Bannack in the summer!

You can take a guided tour, or try your hand at gold panning.

There are weekly programs that might include music, cowboy poetry, stargazing, dancing or natural history.

On the third weekend in July, the town comes to life, with traditional music, staged gunfights, traditional food and more.

There are demonstrations of pioneer skills like quilting and blacksmithing.

You can try your hand at candlemaking or shooting.

You can take a ride in the Model AA car or in an oxen-pulled wagon.

Take part in a guided "Ghost Walk" and the "Living History Weekend".

Go ice skating on the pond!

Bannack was the first capital of Montana.

When the territory of Montana was established in 1864, the bustling town of Bannack was the obvious choice for the capital.

Then, the gold rush shifted to other locations and the population of Bannack dropped. Virginia City became the capital in 1866, and Helena in 1877.

"Bannack" is a spelling mistake!

The early town leaders decided to call the town "Bannock", after the neighboring Bannock Indians. They sent their request off to Washington, but some government clerk must have made a copying error. When the official documents came back, they read "Bannack". The error was never corrected, and Bannack remains the town's name.

Now that you know about Bannack Montana, click here to read about more options for state park camping.

Before you set out on your next camping trip, please visit the Complete Family Camping Guide home page. You'll find lots of essential information to make your trip a success.