Delight your family at your next campfire by telling these short campfire ghost stories for kids. 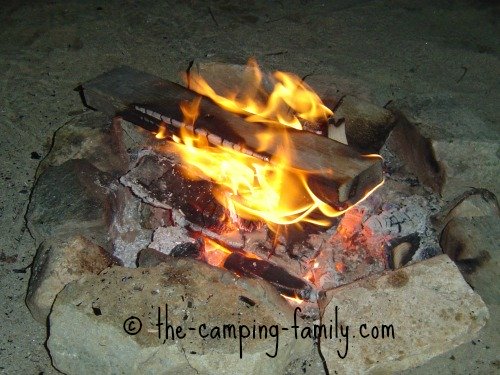 Telling stories around the campfire is a great way to end the day. This might become one of your favorite camping traditions!

Keep your audience in mind.

In the meantime, sing campfire songs together!

Some sensitive children might enjoy these stories if you are careful in the telling. Choose a gentler tone of voice and make the story silly, rather than scary.

Make the story your own.

You could read this story to your family - but it will be much more effective if you tell it in your own words.

You don't have to memorize every detail. Just learn the general idea of the story, and add your own details as you go along.

If you have bigger kids who enjoy being scared in a deliciously fun way, ham it up! Make your voice spooky. Pause for effect. Use sound effects. Have fun!

The Ghost of The Bloody Finger

This scary story turns into a funny story at the very end.

Then, at the last sentence, change his voice completely. Make him sound conversational and friendly.

In a small town not far from here, there was an old abandoned house. No one ever went near it because everyone said that it was haunted.

One day, a bunch of local people were sitting in a coffee shop, chatting about bravery.

One man in particular was bragging loudly. “I’m not afraid of anything!” he boasted.

“Oh yeah?” asked his buddy. “I’ll bet that you aren’t brave enough to spend a night alone in that old abandoned house!” The boaster didn’t want to admit that he was afraid, so he agreed to sleep in the house that very night.

At dusk, he arrived at the house alone. He checked every room and found nothing unusual. He chose an upstairs bedroom, spread out his sleeping bag on the floor, and tried to sleep.

He had just dozed off when he heard a faint noise from downstairs. He strained to hear what it was. It sounded like someone moaning these words:

“I am the ghost of the bloody finger! I am in the front hall!”

The man told himself that he was just imagining things. It must be the wind, he thought.

But then he heard, a bit louder,

“I am the ghost of the bloody finger! I am at the bottom of the stairs!”

“My imagination is running wild!” thought the man. “I am just going to go to sleep, and soon it will be morning.”

But then he heard, even louder,

“I am the ghost of the bloody finger! I am at the top of the stairs!”

The man dove inside his sleeping bag, but he could still hear the ghost coming closer.

“I am the ghost of the bloody finger! I am in the upstairs hall!”

The man hid his head under his pillow, but he could hear the ghost coming even closer.

“I am the ghost of the bloody finger! I am at the bedroom door!”

The man was shaking with terror. The door creaked open.

“I am the ghost of the bloody finger! I am in the bedroom!”

The ghost paused in the doorway.

“I am the ghost of the bloody finger!” (pause) “Do you have a bandaid?”

Here's another classic scary and funny ghost story. Be sure to make your voice very mysterious when you say the last sentence. Pause dramatically before revealing the last words.

There was once a woman who inherited an old house. The neighbors told her that it was haunted, but she didn’t believe them.

When she inspected the house, she was delighted to see that it was completely furnished. She didn’t see anything out of the ordinary, and she moved right in.

On her first night in the house, she got into bed happily. She was just drifting off to sleep when she heard an odd sound, way off in the distance. It sounded like this: “Rap, rap, rap.”

She tried to ignore the sound, but she couldn’t. Finally she decided to get out of bed and investigate.

When she opened her bedroom door, the sound was louder: “Rap, rap, rap”.

She walked down the hallway. The sound got louder: “Rap, rap, rap”.

She headed downstairs. Now it was even louder! “Rap, rap, rap.”

The sound seemed to be coming from a corner of the room. She walked in that direction. “Rap, rap, rap.”

There was a chest of drawers in the corner. The sound was overwhelming now. “Rap, rap, rap.”

She opened the top drawer. There was nothing there.

She opened the second drawer. There was nothing there.

She opened the third drawer. There was nothing there.

She opened the bottom drawer - and saw ……… a roll of wrapping paper!

I hope your family enjoys these short campfire ghost stories! And once the fire has burnt down to coals, be sure to enjoy some camp fire cooking!

You'll find lots more information to help you plan your next camping trip at The Camping Family home page.