The Farkel Dice Game is a game of skill, luck and risk taking. Since it's small and portable and can be played anywhere, it is an ideal camping game. Most importantly, Farkel is a lot of fun!

If you're looking for lots of play value in a small package, Farkel is the game for you! 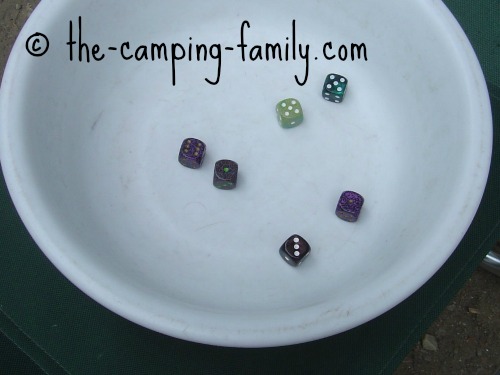 A word of warning:

The first time you play the Farkel Dice Game, you may wonder why in the world I would recommend it. The rules seem complicated at first, and there isn't always immediate success or enjoyment. The scoring system seems tricky. 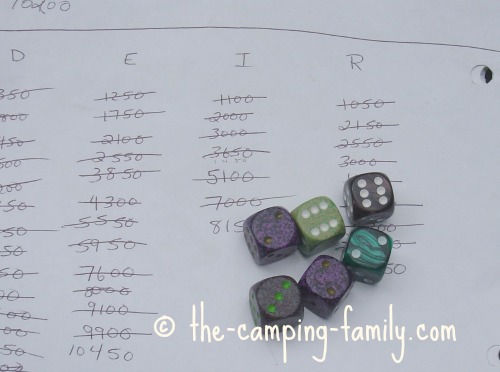 Trust me! Once you have played a game (or two, or three), you'll be hooked!

The rest of my family were already accomplished Farkel players before I played my first game. It took me a while to get the hang of it, and I complained loudly about how bored I was.

i didn't become enthusiastic until I had played two or three games. Then I forgot that it was ever difficult.

Now I'm a Farkel addict!! I love the game, and will play at any opportunity.

What do you need?

You need a Farkel game, which consists of 6 dice and the Farkel rules. You also need paper and a pencil.

Although you can buy a Farkel game that comes in a large box, why would you want to? This easy-to-pack version

measures just 2 inches by 3 inches and weighs only 3 ounces!

How do you play?

When it's your turn, here's what you do:

There are six dice.

Look for a pattern.

Do you have 3 of a kind? Four of a kind? A run of three or more numbers in a row? How about a full house?

Decide which dice to keep and which to throw again.

Maybe you have nothing but a pair of 3s. You might decide to keep those two dice, and roll the rest.

Then it's the next player's turn. Whoever reaches 10000 points first is the winner.

The secret of the game is knowing when to be safe and when to take risks. The winner is generally the person who gambles - but not too much!

How long does a game take?

A game of Farkel takes about 20 minutes, more or less, but you can make a game as long or as short as you choose.

Since Farkel requires some skill in math, it's most suitable for children of about 8 years and up.

If you want to involve the little ones too, get them to shake the dice.

Playing the game provides great, painless arithmetic practice. Don't tell my kids, but they learned everything they know about place value from playing the Farkel Dice Game!

Hints for playing the Farkel dice game at camp 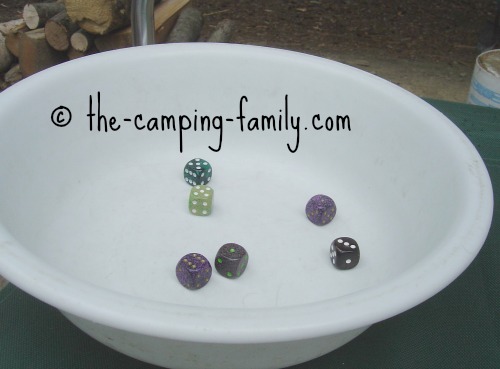 If you enjoy the Farkel Dice Game, check out some more of our favorite family camping games here.

Visit The Camping Family home page for help with every part of your next camping trip.